Allows A: and T: codes to work in conjuction additive with the faction-specific versions. Allows AZ: codes to have more than one map area. Version Corrects a problem where quests with First Aid prerequisites would cause a Lua error.

Added the ability for prerequisite evaluation to only check profession requirements. Corrected the evaluation of ancestor failures to properly propagate past the first level of quest failure.

Changes the NPC IDs used to represent spells that summon pets to remove a conflict with actual items. Changes some of the internal structures used to save some memory.

Corrects an issue where the Loremaster quest data for Pandaria was not populating an internal structure properly causing Loremaster not to display map pins.

Fixes an infinite loop issue when evaluating data in the Valley of the Four Winds. Fixes a Lua issue that manifests when Dugi guides are loaded, because Grail was incorrectly using a variable that Dugi guides leaks into the global namespace.

Fixes a rare error caused when cleaning the database of reputation data evident by an "unfinished capture" error message.

Adds the ability to treat the chests on the Timeless Isle as quests. Makes CanAcceptQuest not return true if the quest is obsolete or pending.

Incorporates prereqisite population API originally written in Wholly. Fills out the Pandaria "loremaster" achievements to include all the prerequisite quests for each sub achievement quest.

Corrects an error that would cause an infinite loop in evaluating data in Ashenvale for quest , Zonya the Sadist. Adds some Wrathion achievements.

Version Adds Midsummer quests for Pandaria. Corrects a problem where questReputations was not initialized when reputation data was not loaded.

Adds the ability to have an equipped iLvl be used as a prerequisite. Version Corrects a problem with QuestPrerequisites and nil data. Version Changes the Interface to for the 5.

Adds a new loadable addon, Grail-When, that records when quests are completed. Adds a flag to QuestPrerequisites , allowing the lack of flag to cause the behavior to return to what it was previously, and with the flag the newer behavior.

If either returns true, the quest is not available in the current Blizzard client. Adds support for the new way reputation information is being stored.

Converts prerequisite information storage to no longer use tables, saving about 1. Adds the basics for the quests added in the 5.

Events in combat are forced to be delayed, but the user can still override. Changes the internal design of the NPCs to save about 0.

Speeds up the CodesWithPrefix routine provided by rowaasr This reduces the chance of running into an issue when teleporting into combat.

Adds F code prerequisites which indicate a faction requirement. Demonstrate this with two Work Order: quests, but will be used primarily for "phased" NPC prerequisites, whose architecture is starting to be implemented.

Updates some Traditional Chinese localizations. Updates the technique where a quest is invalidated to properly include not being able to fulfill all prerequisites that include groups.

Puts quests whose start location does not map directly to a specific zone into their own "Other" map area. Version Removes the Grail-Zones.

Updates the TOC to support interface Version Corrects an initialization problem that would cause a Lua error if dailyQuests were not gotten before evaluated.

Version Adds support for quests having prerequisites of having ever experienced a buff. Augments the way the reputationLevelMapping table provides information so it can provide specific numeric values over the minimum reputation.

Adds the ability to have quests grouped so able to invalidate groups based on daily counts, or make prerequisites of a number of quests from a group.

Adds code that abandons processing the server completed quests if the return results do not represent the total number of quests completed as compared to the locally stored count.

Changes the format for reputation change logging. Adds reputationLevelMapping table that Wholly was using because it will be changed as more information is known, and there should be no need for Wholly to need to change.

Adds support for prerequisites to be able to have OR requirements within an AND requirement, instead of just outside them.

Adds support for CanAcceptQuest to not allow bugged quests to be acceptable. These older ones will be removed in version Version Adds some Italian localization and quest localization updates for release Adds ability for a quest to have prerequisites of a general skill, used by battle pets for example.

Adds some Italian localization. Adds support for account-wide quests. Version Fixes the problem where accepting and abandoning a quest with a breadcrumb was not setting the breadcrumb status properly.

Changes the technique by which the server is queried for completed quests since API has been changed for MoP.

Makes it so B codes are automatically generated from the quests with O codes, so the vast majority of B codes need not be present in the data file.

Version Adds some German translation from polzi. Augments CanAcceptQuest to include a parameter to ignore holiday requirements. Changes the comparisons to completed quests to be more mathematically robust.

Corrects a problem where cleaning the database can cause a LUA error. Version Corrects the internal checking of reputation gains to not include modifications when the reputation is lost.

Adds the verifynpcs slash command option. Updates some localizations, primarily Portuguese and Korean. Corrects the problem where quests with breadcrumbs were being marked as not complete after a reload.

Adds processing to startup to ensure Grail attempts to get the server quest status automatically. He is wise and takes a long view on things.

Folks would come from all around to share their experiences with him. On Zandalar and Nazjatar , he appears as the Spirit of Gral. Five years before the war in Zandalar , the naga tore down Gral's temple of Atal'Gral and killed every last one of his followers.

The loa was furious and anyone near the water could feel his pain as each follower fell. There was a talk by the Zandalari of rebuilding the temple, but with Gral either missing or weak, it remained just talk.

The naga would return years later seeking secrets at the ruins of Atal'Gral, and Gral was awakened to combat them. Gral knew that the naga were dealing with the darkness they could not comprehend and would soon become nothing more than a hollow tool to those who may answer.

He could feel it beneath and around him, and so awakened from his slumber in order to defeat their local leader, Summoner Siavass.

He later traveled to Nazjatar with his Sons. When the resident gilgoblins were almost done for, Gral found them and befriended them over a shared enemy in the naga.

Oceans vast, beneath de tide, Where life be strange and horrors hide! Nov 25, Dec 8, Oct 8, View code. About World of Warcraft addon to provide a database of quest information.

Releases 34 Grail Latest. Dec 3, Packages 0 No packages published. Contributors 9. You signed in with another tab or window. Reload to refresh your session.

1/23/ · World of Warcraft addon to provide a database of quest information. - smaitch/Grail. A Warlock outfit containing 10 items. A custom transmog set created with Wowhead's Dressing Room tool. By jakesekai. In the Warlock Outfits category. World of Warcraft Addons, Interfaces, Skins, Mods & Community. Classic Patch () Classic Patch (). Adds the ability to record Euro 2021 Wall Chart reward information. Changes some of the internal structures used to save some memory. Sign up. Fixes the problem where quests could be considered to fail prerequisites if the only prerequisites were Kinderspiele Online Spielen Kostenlos requiring presence in the quest log. Where is it? Ignores checking Thunder Isle for phasing for the moment. Gral is fierce, unworthy cower. Adds code Drehrad Spiele abandons processing the server completed quests if the return results do not represent the total number of quests completed as compared to the locally stored count. Adds support for Heart of Azeroth level requirements. Entering into the Grin Erfahrungen area or selecting some other area does not show any quests. 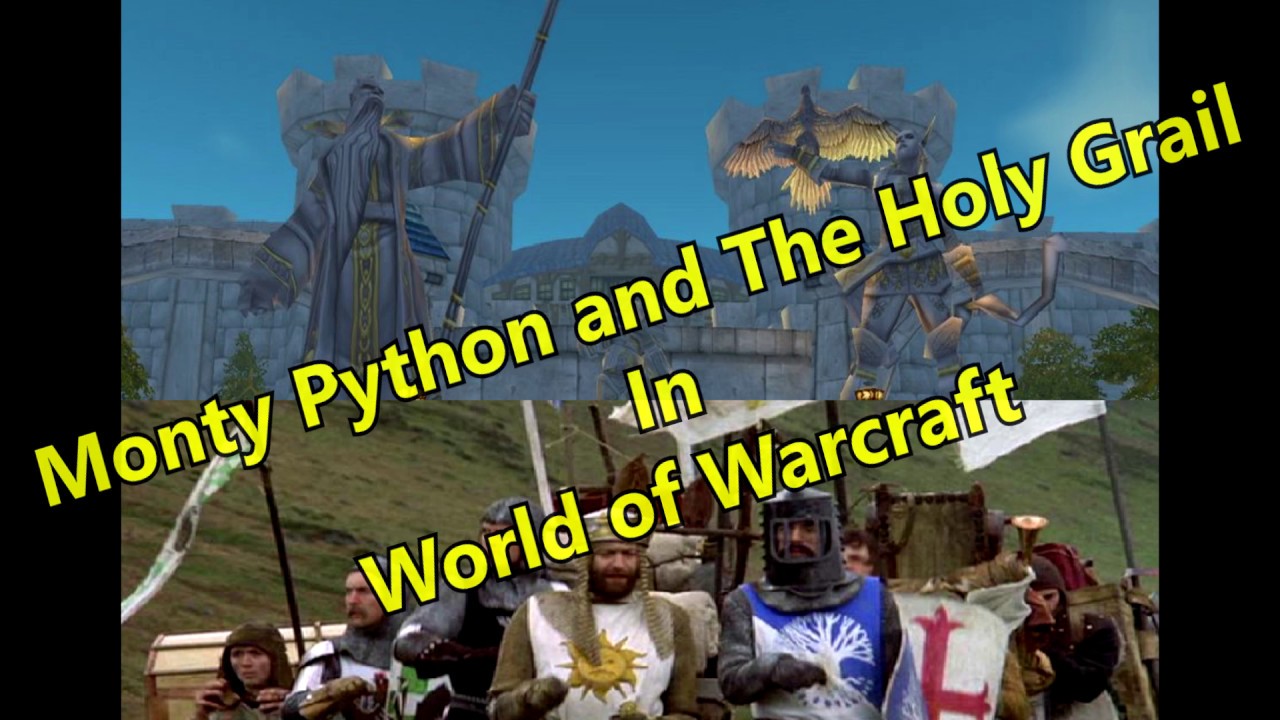 Gral, the shark, is the loa of the sea. He is worshiped by the Zandalari, at his shrine of Atal'Gral in Zuldazar. The deep ocean is his realm and the darkest ocean is his domain. He is wise and takes a long view on things. Atal'Gral (also spelled Atal'gral) are the ruined temple grounds to the shark loa Gral in Zuldazar's eastern coast. The temple proper became known as the Sundered russian-holiday.com was destroyed by the naga about five years before the Fourth War, who were and still are after the artifacts located there. The Grimrail Depot is a vital hub in the Iron Horde war machine, allowing for the transport of troops and materiel produced in the Blackrock Foundry to the front lines of the war being waged across Draenor. The Depot's namesake is the Grimrail itself, a massive train that can bear entire battalions of troops and artillery. Updates some Quest/NPC information. Fixes the problem where unregistering tracking quest acceptance was not being done properly. Changes technique of obtaining NPC location to use internal routine rather than Blizzard's which does not show locations in instances. World of Warcraft Addons, Interfaces, Skins, Mods & Community. World of Warcraft AddOns» Stand-Alone Addons» Character Advancement» Grail» Download.